While the world is in the midst of the Covid-19 pandemic, the need for organ donations does not go away.

Please join the Canadian Transplant Association’s Green Shirt Day and see if we can keep the Logan Boulet Effect going… Let’s register, call your friends, call your family… be inspired by Logan’s story.

Let’s see if we can find a kidney for my good friend Curtis, who is still waiting for a life altering kidney transplant.

Let’s see if we can change his, or someone else’s, life.

To find out more about the Organ Donor Program in BC, click here:
Organ Donation (transplant.bc.ca)

When I heard my good friend Curtis needed a kidney, I, along with 12 others, signed up right away. The process started with lab tests, then tests of my heart and lungs. I even had the “joy” of wearing a BP monitor for 24 hours…TWICE! Things were progressing well, but after these tests, I was the only donor who was viable to go forward. 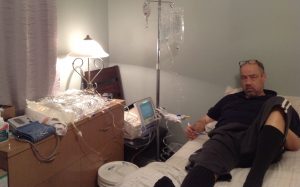 I began this journey to become a kidney donor late in 2018, when I found out Curtis’ first kidney transplant had failed, after 9 ½ years. Things were going along quite well and I was finding out along the way, my current health condition was very good. We got to a point in the testing process where it was determined I could not directly donate to Curtis. There was some sort of anti-body mismatch and the hopes of donating directly, were gone. It was disappointing to all, but the journey wasn’t over.

There is a program at St. Paul’s Hospital in Vancouver BC, that partners a kidney to the patient in need. Knowing there was another way to help Curtis, I continued the testing to see if there was going to be a possible match of my kidney for someone else who also had a partner with a kidney, that matched Curtis.

At the beginning it felt strange to think my kidney was going to go into a stranger. But after talking with my children, who are wiser than they believe, I decided to go through with it. I was willing to lie down on an operating table and wake up later with one less kidney, knowing that Curtis would get his life back. So why would it matter where my kidney ended up as long as Curtis could return to a normal lifestyle?

The final two tests that I had, took place at St. Paul’s Hospital where I had a renogram and a CT scan with dye. After the renogram was done, things were looking bright because it was very obvious my kidneys were functioning equally. So, it seemed like it was just a formality to map out the kidneys with the CT scan. Unfortunately, this is where the journey ended. The CT scan indicated there was some calcification on one of the arteries. Because the doctors at St. Paul’s place a high priority on the donor’s health, it was determined I would not be a candidate.

It had been about eight months to get to where I was in the process. It was disappointing as hell. But from a personal perspective I definitely had a clean bill of health knowing full well that I had the most detailed and complex medical evaluation of my life.

Now the story changes for me, but not Curtis. Curtis still has to find a private place to perform his own personal dialysis every 4 to 5 hours, each and every day. To put it into perspective, medical supplies that Curtis go through on a daily basis, would fill one and a half photocopy paper boxes. Curtis is virtually handcuffed on a daily basis to these medical supplies, which makes it impossible to travel any great distance. As you can imagine this is not a great way to live one’s life.

The story now goes out to the general public as we shake the trees to see if someone can step up and become a living kidney donor. I’m asking you to look at these links and consider stepping up to the most rewarding challenge you will ever face. The testing is done at your own pace and your own schedule. It’s done privately and confidentially and quite frankly the information you get while you’re going through this process is good for your body and soul.

Curtis is a good friend of mine, and we need your help.

Please share this, repost this, print this, talk about this, and help me, help Curtis, get his life back.

Find out more about donating, by clicking the link below: