This honour was in recognition of his years of selfless work on behalf of his fellow fire fighters throughout the Province of British Columbia and the International Association of Fire Fighters (IAFF). Starchuk has worked tirelessly in assisting fire fighters with resolving work related injuries and in improving and maintaining their overall health and wellness.  Surrey Fire Fighters’ Association President Mike McNamara stated, “Mike has been their anchor with his work and support of firefighters and their families, when they needed it most.”

You can read more about Mike’s selfless work on behalf of BC Fire Fighters, his community activism, and long history of volunteering and community involvement, here: https://surreyfirefighters.com/starchuk-bcpffa-honourary/

On November 3rd, Mike Starchuk and the Surrey First Team were honoured to be endorsed by the BC Professional Fire Fighters’ Association, because of their support for Fire Fighters, and public safety issues. 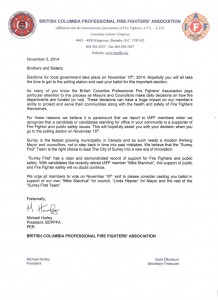 You can read the full text of the BC Professional Fire Fighters’ Association endorsement of Mike and the Surrey First Team, here: BCPFFA endorsement

(It should be noted that this endorsement is in addition to the previously given endorsement by the Surrey Fire Fighters – Local 1271, of Mike Starchuk and current Surrey First City Council members) 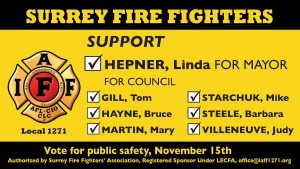